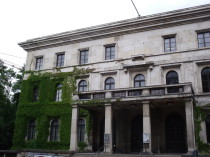 Munich had always a special meaning for Adolf Hitler. Here he entered the political arena and experienced successes and defeats. Munich was for the Nazis the "capital of the movement".

On our guided tour, we learn about the beginnings of the Nazi Party and how Hitler became the leader of this movement.

Our route takes us alongside the party center at the „Königsplatz“ as well as to places of the Jewish community, whose fate was influenced by Nazism, places of terror and oppresssion and to places that bear witness to the resistance against injustice.