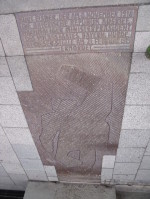 In the aftermath of the First World War Munich experienced strong political and social upheavals.

Here exclaimed Kurt Eisner, the first social democratic Prime Minister, the Republic and was killed shortly afterwards. Freikorps (paramilitary forces) suppressed a revolution in the city brutally. Political killings from the left and right were on the agenda.

In beer cellars and backyards, a new political movement was born - National Socialism. And in 1923 Adolf Hitler and his followers tried to stage a coup to power - and failed in the Bavarian police gunfire.

But he returned and went on inexorably. Munich should always remain for him the "capital of the movement".

Our guided tour takes us to the places of this troubled time, the assassination of Kurt Eisner, the center of the Thule Society and we follow the rise of Adolf Hitler and his party and his infamous "March to the Field Marshals' Hall" on our guided tour.

(By request we can have an extensive break in the Hofbräuhaus, which fits perfectly well into our guided tour)